← more from
Shadow Kingdom Records
Get fresh music recommendations delivered to your inbox every Friday.
We've updated our Terms of Use. You can review the changes here.

by TEMPLE OF VOID 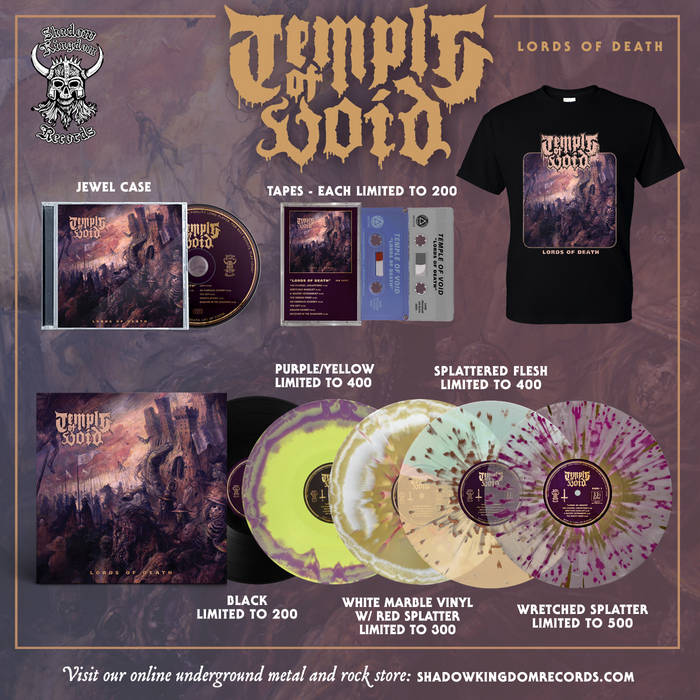 Revblank Crushing and brutal, but, dare I say, groovy? Great hooks made from slabs of guitar tone. I'm really digging this. Favorite track: The Gift.

Morbid_chris829 My hometown heroes, TEMPLE OF VOID will liberate your head from your body...skull crushing, doom and gloom infused metal that kills...Hailz!

TEMPLE OF VOID self-released their first demo in 2013. Four weeks later, they had signed to four different record labels to release Demo MMXIII and their imminent debut album across the world. The demo was met with staggering support from the underground, but just over a year later, TEMPLE OF VOID unleashed their debut album, Of Terror and the Supernatural, via Saw Her Ghost Records for the double-LP vinyl version and on CD through Rain Without End Records. The day it was released, SHADOW KINGDOM contacted the band and requested dibs on re-releasing the album to a worldwide audience. Unleashed internationally in September 2015, the slab of barbarity otherwise known as Of Terror and the Supernatural quickly became a critically acclaimed cult hit amongst the press and those looking for the darkest, dirtiest doom-death.

But, with the bar set so high by that debut album, TEMPLE OF VOID swagger forth to eclipse that achievement and soundly obliterate any comparisons with Lords of Death. A prescient title if there ever was one, Lords of Death casts TEMPLE OF VOID in a slightly newer light: whilst unmistakably TEMPLE OF VOID, this is the sound of the band shorn of any fat and fully representing the powerful, punishing experience of the band in a live setting. It's still signature TEMPLE OF VOID, to be sure, but Lords of Death emits an enviable amount of focus and forward momentum, with the band largely ditching the doomier tropes in favor of ones reflective of their all-consuming onstage power. Instead, TEMPLE OF VOID emphasized the deathlier aspects of their debut, but pumped them full of addicting, headbanging energy. Put another way, whereas Of Terror and the Supernatural was doom with death metal, Lords of Death is death metal with doom. Fittingly, the production here is utterly CRUSHING, and once again recorded at Mount Doom in Detroit.

"An uncompromising record from the band that made one of the very best, if not THE best death/doom debut in last five years or so. Weighty death metal groove and suffocating, gloomy atmosphere in just the right mix together. Album-of-the-year material!" – Markus Makkonen (Hooded Menace / Sadistik Forest)

Bandcamp Daily  your guide to the world of Bandcamp

Semiratruth joins the show to discuss their latest release, "loading..".